In the 1980s, American elites feared the rise of economic powerhouse Japan, but managed to contain its competitor because Japan was at root a vassal state occupied by the US military. However, China's rise today is a different story altogether. With 1.4 billion people, the largest economy in the world (by GDP at purchasing power parity - PPP), and an independent foreign policy, China's rise heralds the beginning of a multi-polar world.

The 'American Century' is over, but Americans cannot accept the fact that they - 5% of the world's population - cannot rule the other 95% forever. American entitlement and hubris are causing many to lash out and embark on a path that is perilous both to themselves and the world.

Let's take a look at some illogical American talking points used in the smear campaign against China:

"China is going to collapse soon!"

If Americans really believed this, they would sit back, smile and ignore China.

"China is going to take over the world!"

This paranoid warning usually follows the delusional, "China will collapse" claim. Make up your mind!

"Our free market is the best and China is communist!"

Americans conveniently forget that the US government subsidizes farmers, Big Pharma and the military-industrial-complex with hundreds of billions of dollars annually. Also, when developing nations subsidize Western corporations, it's applauded as smart business; but when developing nations help their domestic firms, it's vilified as socialism or communism.

What's even more interesting is that China now has more publicly traded companies than the US! There's more competition in "communist" China than in the "capitalist" US. For example, the US has one smartphone company (Apple), while China has Huawei, Xiaomi, Oppo, Vivo, ZTE, OnePlus, Transsion, etc.

Finally, comparing the economic growth of the US and China over the last four decades, no one can reasonably say that the US is superior to the China model: 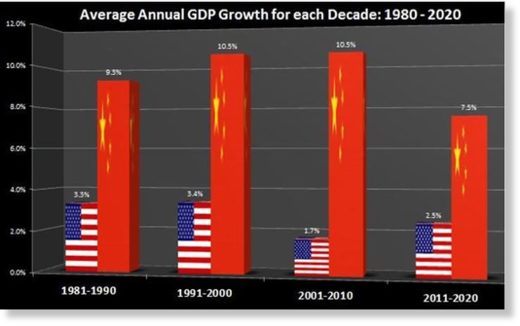 "China isn't open! It discriminates against US corporations!"

This is often accompanied by, "We should decouple from China!" This 'logic' hurts the brain.

Also, while demanding that China treat American companies just like Chinese companies, the US has placed 140 Chinese companies under the "entity list," meaning they can't do business with US corporations or the government.

This is followed by, "OMG! There are Chinese bots and trolls flooding our social media. Ban them, please!"

China has been #1 in both scientific publications and patents for the last few years. Why? China spends $300 billion a year on R&D and graduates 8 times as many STEM graduates as the US. Chinese companies like Huawei, Alibaba and SenseTime are leapfrogging over the US in AI software, AI chips, database software, 5G etc. And young Chinese people have the "9-9-6" work ethic - they work 9am to 9pm, 6 days a week.

Well, it's like sports where partisan supporters are certain that the other team won only by cheating.

In exchange for technology, China offered generous subsidies and tax cuts that allowed US corporations to make trillions of dollars over the last 40 years. To put it succinctly: China bought the technology from American, European, Japanese and Korean companies. Americans didn't mind the technology transfer, because they never thought that China could compete - after all, China merely employs slave labor to make crappy products, right?

"China is a totalitarian government! We are so amazing because we have Democracy!"

Democracy in America is a joke. As Joseph Stiglitz, former Chief Economist of the World Bank said, "America is of the 1%, by the 1% and for the 1%."

The Chinese government is based on meritocracy and has a 90% approval rate. While it's not perfect, it has done a remarkable job in the last 40 years by lifting 800 million people out of poverty and creating the world's largest middle class.

Also, note that the US never tries to spread democracy in Saudi Arabia, Kuwait, the UAE, etc. 'Freedom and democracy' propaganda is a selective tool, not anchored to any consistent values or principles worthy of being called such.

Like "Saddam threw babies out of incubators" or "Assad uses chemical weapons," the US started the "1 million Chinese Muslims in concentration camps" narrative in early 2018. While hundreds of diplomats and journalists from all over the world have visited these re-education camps in Xinjiang, the US establishment sticks to its pathetic atrocity propaganda.

When that desperate narrative fizzled out, whoever is responsible for conducting psy-ops in Washington DC restarted the "organ-harvesting" fake news with the help of Falun Gong and the World Uyghur Congress, both of which are funded by the US.

No matter how absurd or sensationalist, it's never a "conspiracy theory" when it's about China, Russia, Iran or any other geopolitical competitor.

Behind all this anti-China propaganda is deep-seated racism in Americans that cannot accept the Chinese as equals. If confronted about racism, Americans would say, "I only hate the Chinese government, not the people." However, this is clearly disproved by how Americans behave on social media, where any article that's negative about China instantly goes viral; and positive news about China gets ignored or even downvoted.

'Yellow Peril syndrome' is deeper among those in the US establishment. The right-wing is more blatant and sensational: "The Chinese aren't smarter. They CHEAT," tweeted Republican Senator Lindsey Graham. A US State Department official said, "It's the first time that we will have a great power competitor that is not Caucasian." The FBI Director upped the ante and called China a "whole-of-society threat." Like George Orwell's '

Nathan Rich - an American living in China -
how YouTube actively worked against him. For example, his subscriber numbers would go down substantially, people could only dislike his videos but could not like them, his videos wouldn't show up in searches, etc. Twitter also purges pro-China people, but if there's a huge outcry - like when they deleted Carl Zha's account - the thought police would quietly reinstate a handful of the victims.

Anyone who's remotely pro-China on social media is vilified as a Chinese bot or a "Wumao" - a person who supposedly works for 50 cents/hour to spread Chinese propaganda.

On Reddit, there's a sub-group called "r/China" with 120,000 members. But you won't find anything positive or neutral about China in that group — it's a sewer of racism and hatred. And people who post positive news about China also get banned or attacked by online mobs.

From corporate media to social media, only one-sided sensational claims are allowed.

The concept of 'freedom of speech and expression' in the US is a farce.

Meanwhile, China has a lot of room to grow, since its GDP-per-capita is still only $10,000 overall and $20,000 in big cities. China's strategy is to keep calm, maintain growth, expand trade, and become technologically independent by 2025 — especially in semiconductors. By 2030, China's nominal GDP will be larger than that of the US; and Asia will account for 40% of global GDP. If China can successfully navigate all the proxy and hybrid wars waged by belligerent America in the next decade, then China and Eurasia will be the shining stars of this century.